Friendly - Festival of Britain Match
Monday, May 14th, 1951, 3:00 PM
Attendance: 3,000Leytonstone, five times Isthmian League champions, and former club of Jim Paviour, Trowbridge Town team manager, provided a holiday crowd over 3,000 with 90 minutes of top-grade football in the first of two Festival of Britain matches on the Town ground Whit Monday afternoon. Trowbridge won by 3-2 - a lucky victory, we think, for the winning goal came from penalty kick which Referee E. T. Meaden awarded after he had consulted linesman. The Londoners, however, delighted the onlookers by the classical manner in which they demonstrated the art of team work and how to play football cleverly and cleanly and with minimum of physical effort. Trowbridge, let it be recorded, played a good hard game against their redoubtable opponents, but hoped the locals took full notice of the object lessons provided by their clever amateur opponents. It is a long while since Trowbridge had had to defend their goal against such an avalanche of corner-kicks, and more than once goalkeeper George Vince was seen smiling at the remarkable escapes, of his goal. Leytonstone's left wing was very effective for a time with the elusive Leon Joseph displaying that skilful touchline prowess which has made him an amateur international for many seasons. It was well, however, for Joseph that he had a full bag of tricks, for King, Trowbridge's young reserve full back, got the measure of his clever opponent bit by bit, and certainly deserved congratulations for excellent display which stamped him as grand full back in the future. The Town defence as a whole played well under pressure. Kavanagh, the visitors' captain and left full back, was also outstanding. The home crowd gave Ivor Nicholls, a former Trowbridge player, a special welcome. He played a strong game at left half, where he deputised for Fright, another England amateur international, who watched the match from the touchline owing to a foot injury.
Trowbridge's attacks came mostly from long forward passes, and there were occasions when they might have scored from these raids. Young J. Davies played very intelligently, and his coolness often brought him through to give perfect passes to Haddon who unusual to record, was not quite up to his usual standard. Trowbridge went ahead after ten minutes when Haddon pushed the ball through to Abrahams, who ran almost to the goal-line before squaring the ball to Digg, who beat Kane with a perfectly-judged ground shot into the left-hand corner. Dagg and Haddon missed good chances, before Hallybone headed an equaliser after 20 minutes. Vince cleared with a hefty punch away from Joseph, but ten minutes from the interval, from one of many corners perfectly placed by Joseph. Groves gave the visitors the lead with an unstoppable shot.
Eighteen minutes after the restart Vale (right back) was injured, and when the ball was set in motion again Webb swept down the left wing and crashed a shot which Kane pushed out, but Dagg, following up smartly, headed the ball into the net - a very good goal. Not long afterwards Webb had a glorious chance to score, but shot very weakly into Kane's arms. Groves collapsed with a twisted ankle and retired after 72 minutes play. A grand shot by Abrahams was pushed out for a corner, and Dagg, in a solo run, took the ball almost to Kane's feet, only to be robbed by a remarkable effort by defender. A few minutes from the end Dagg cleverly headed the ball forward, eluded Hockaday, and cut through at top speed. Just as he was in the act of shooting, however, Dagg was seen to fall in the penalty area after being tackled, and the referee awarded a "spot" kick after consulting a linesman. From this Haddon made no mistake. A pity that such a pleasantly contested match had to end thus, but the players left the field shaking each other by the hand. The Leytonstone players afterwards said how much they had enjoyed the game. Their biggest disappointment was the rough surface of the pitch. The Club's ground improvement scheme should rectify this by next season.
Four coaches brought the Leytonstone players and supporters, while others made the trip by private car. After the match the players and officials had tea at the Longfield Hotel, when Jim Paviour met many of his old club mates in an hour of happy reminiscences.
The gate of &pound162 was shared by the clubs, the visiting team paying their own expenses.

Report from the Wiltshire Times 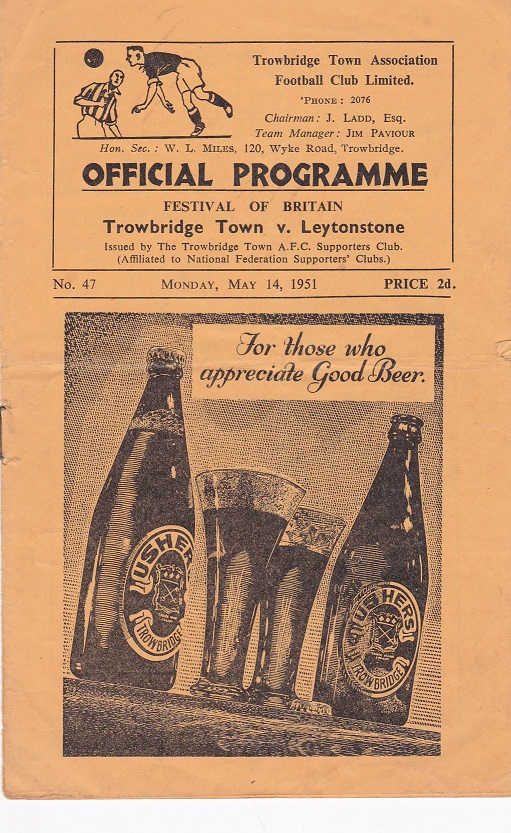