League - Western League Division One
Saturday, November 11th, 1950, 3:00 PM
Attendance: 1,847GAME OF MISSED CHANCES
Trowbridge Town, playing their first home Western League Division 1 game since Sept, 9th, defeated Peasedown Miners 6-1, but the final score ought to have been at least a dozen, for some very easy scoring chances were missed. Jack Dagg, although opening his scoring account for the club after several unsuccessful attempts, had a bad afternoon with his shooting, but one or two headers recalled some of the games in recent seasons when he was in almost faultless scoring form. Last Saturday the heavy ground and greasy ball did not appear to be to Dagg's liking at all.
There was surprise for the home supporters when shortly before the kick-off was announced that Grimason, the former Weymouth forward, would playing at inside right, having agreed to have a trial with the Town. He played with remarkable confidence and combined effectively with Haddon, the pair often interchanging positions as though they had been partners for a long time. Grimason, who played for Weymouth Reserves against Trowbridge in a Western League match at Trowbridge Dec 17th last, when the Town won 2-0, scored three goals. He played in place of Hancock, who was assisting Wiltshire.
Trowbridge took the lead after six minutes, when Dagg took a pass from Webb and scored, Grimason adding a second two minutes later with a well-placed shot from Abrahams's pass. Except for brief excursions into the Town goal area Peasedown rarely troubled goalkeeper Vince. Peasedown's solitary goal, which was only their seventh nine league games, came from a really fine shot by left-half Sparkes. Tanner, in the Miners' goal, was seldom inactive, but he must have been amazed at some of Dagg's misses. Cochrane, who once played for Trowbridge, played a remarkably courageous game at centre half for Peasedown, while Jimmy Welch, at left back for Trowbridge, revealed his old-time speed and effective tackling. Dagg scored Trowbridge's third goal before half-time, and scorers in the second half were Grimason (23 minutes). Haddon (penalty, 25 min.) and Grimason (38 min.). The attendance was 1,847 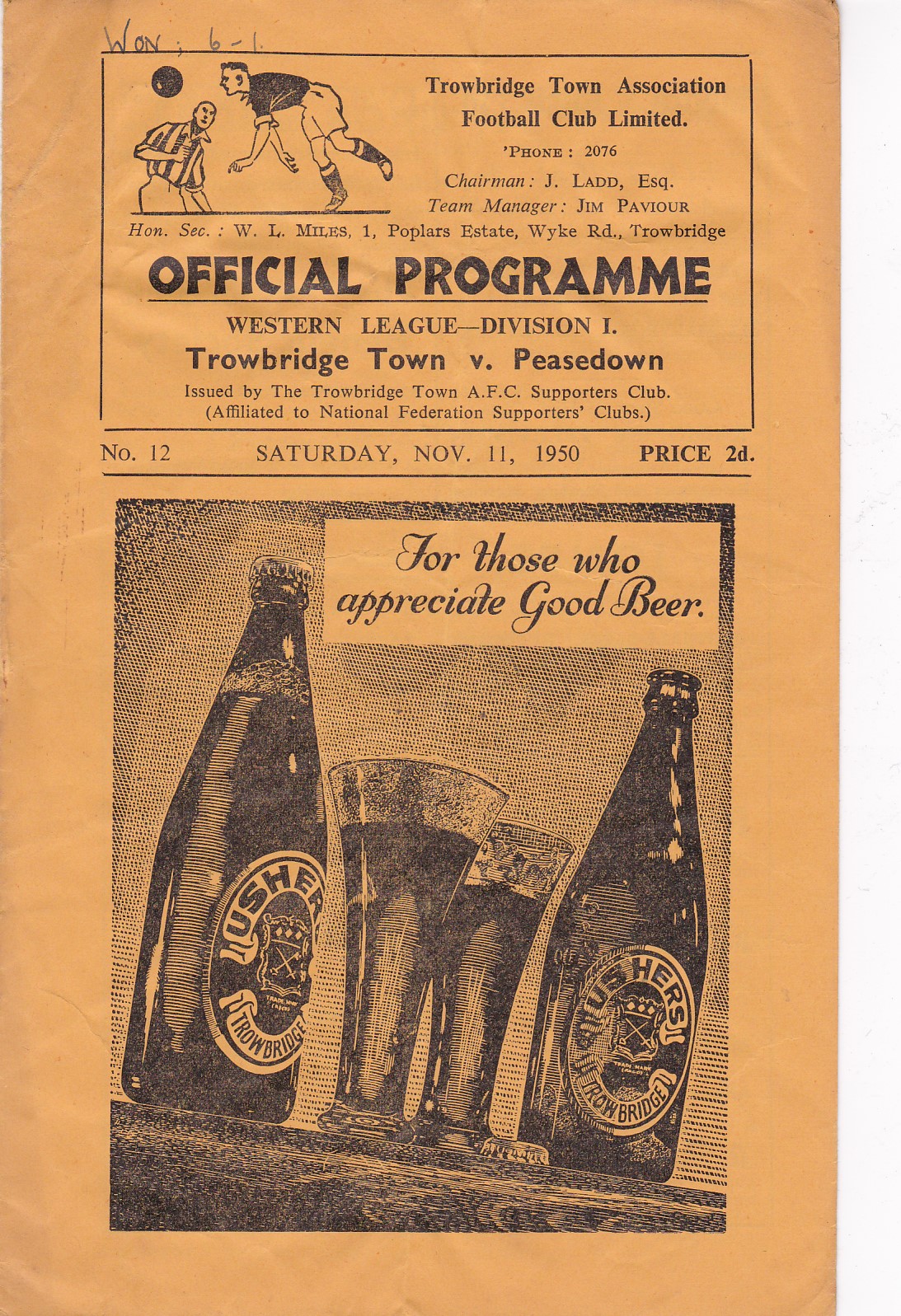